Richard passed away at home in Torquay earlier this month. After a career with Australia Post, Richard became an active community member in Torquay. A very private person, he was however well known through his association with Yoga and his love of a short black coffee with a jam scone most days at the SANDBAR Restaurant in Gilbert Street, Torquay.

It was here his interest in MGs was encouraged and resulted in his purchase of a red MG TF ( possibly from Peter Smith?) approximately two years ago. He joined our MGCC that year.

Although his battle with cancer prevented him from being more active in club events, he read every word of each of the GTorque magazines and would discuss the article with other interested car patrons at Sandbar.

Such was his fellowship with the Torquay community, that the owners of Sandbar hosted a wake for Richard, featuring, of course, scones with jam and cream. Our club’s respects were noted.

(thanks to Peter Cribb for this info). 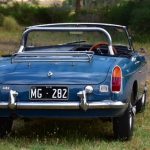 Picnic By The Bay - Car Display